User routes can reveal more about your competitors than you think.

Business development is not abstract for Builders, a South African chain of DIY stores from Walmart Group.

Several years ago, they embarked on rebranding and developed the concept of “the Store of the Future” with a bouquet of services, including 3D printing. The retail chain has already updated a number of its outlets: stores underwent reconstruction and then reopened brand new and modernly equipped.

In 2019, the company decided to open another Builders Express (BEX) near Johannesburg, and for the first time in their 15 year history, it was going to be not a separate building but a part of a shopping centre. We were the technical partners of the company that assisted Builders in finding the right spot.

Expansion is a Nuanced Matter

Unlike a convenience store, you can’t put a hardware store on every block.

The demand for building materials is concentrated in industrial regions, where enterprises buy goods, say, once a quarter, but in large batches. They have established their price and quality requirements, so they constantly purchase from specific manufacturers. Ideal for businesses and contractors, the hardware store is close to vital transportation hubs and works with familiar suppliers.

However, the target audience of Builders Express is not builders or factories but ordinary buyers who need to do something around the house. There’s very little chance they would drive around every store in the city looking for wallpaper of a specific brand for the hallway. The ideal store for a homeowner is a nearby one-stop-shop, where one can find everything needed for home repairs and interior design.

As the assortment of DIY “supermarkets” is more or less the same, the location becomes the determining factor: with a high probability, if the buyer can purchase everything they need in the nearest store, they won’t go further.

Based on all this, Builders initially spotted the Cresta Shopping Centre – a mall with high foot traffic located in the centre of the eponymous area at the main transport hub near Johannesburg. It became the starting point of the analysis. We had to check if the mall fits for opening a new BEX and whether there are better locations.

We evaluated locations by their cross-visitation metric. Why so?

There are many reasons one location is more suitable for a DIY store than another: the state of the housing stock, the pace of housing development, the transport accessibility, and even the size of the parking lot. However, the number of potential buyers is the most important. No people – no revenue.

At the same time, it is not enough to just find a densely populated area:

That means we need to calculate how many people will go to Builders in Cresta instead of other stores:

To calculate all this, we analysed aggregated data on movements from mobile devices received from providers. It represents a reasonably accurate audience slice but does not allow for de-anonymizing users, thus preserving the balance between privacy and commercial benefits.

Of course, there is more to such analytics than calculating the passability through point A using raw data. A dozen providers collect geolocation from tens of thousands of devices every few minutes. All this data must be collected, mapped, filtered, and noise compensated, and only then can you analyse and visualise movements.

Extracting truly accurate results from large disparate (and sometimes inaccurate) data is a non-trivial task full of trial and error. But we managed to solve it beforehand.

For over 15 years, we have been developing machine learning algorithms for Big Data. Based on these developments, we have created a system analysing Points of Interest – points on the map that interest the client.

Our clients come from various industries, so we regularly solve non-standard tasks. For example, we calculate the conversion rate for an out-of-home advertising operator, analyse visitor segments for luxury car dealerships, or select a site for a new building for an international private school network. The time had come to help the network of hardware and DIY stores.

To begin with, we compared Cresta with its neighbours to find out the share of potential buyers of the new store.

We analysed users’ routes within a radius of 10 km around Cresta for three months. During this time, 57 thousand devices were pinged, of which more than 3.8 thousand (7%) appeared in DIY stores.

The data obtained at night, when most residents stay home, became the baseline. By comparing it with the daytime data, we found where residents of different areas went.

As expected, Cresta is the most densely populated area, with more than half analysed users living there. In addition to the permanent residents, many potential buyers travel there from the neighbouring urban areas of Randburg, including Cresta, Roodepoort, and Sandton.

The most critical question Builders wanted to answer in advance was how the opening of BEX in Cresta would affect the chain’s market share. It breaks down into three other questions:

Since Cresta was not the only crowded place in this radius, we expanded the analysis area by four times, including almost the entire Randburg area with its population of 350 thousand people, and some parts of the neighbouring cities.

There are 23 DIY and hardware stores around Cresta. We tracked the devices of their visitors and analysed their movements.

The night-time device distribution was homogeneous; however, they concentrated in separate areas during the daytime.

Those “hottest” areas on the map did not interest us: they are more popular because they are already crammed with Builders and competitors’ stores. Opening another one there is impractical.

On the contrary, such locations as Cresta, Sandown, Rosebank, and Parktown were worth the attention. They are rather popular among the target audience and are not busy with competitors.

Since Cresta remained the main object of analysis, we concentrated on its inhabitants: 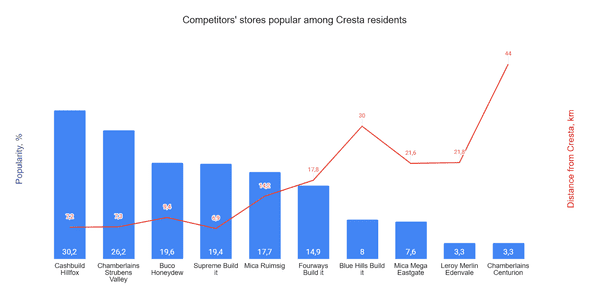 These are the people who are more likely to go to the new Builders Express nearby instead of driving to the next neighbourhood for seven-plus kilometres, meaning BEX Cresta could snatch this audience from competitors.

By the same principle, we analysed the risks of cannibalization between the Builders’ stores. We filtered devices from Cresta that were seen in neighbouring Builders and calculated their share of the total number of visitors. 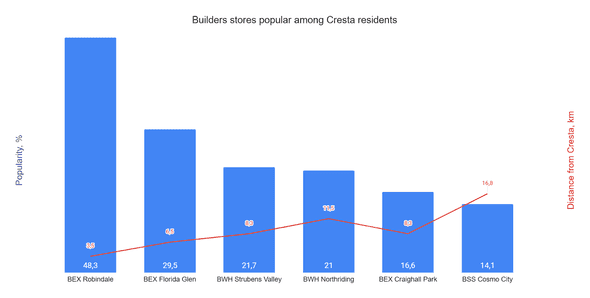 Half of the visitors to BEX Robindale, a third to BEX Florida Glen, and one in five to BWH Strubens Valley and Northriding come from Cresta. So the risk is relatively high. However, market share growth is strategically more important for Builders and outweighs the profit lost due to cannibalization.

We’ve confirmed that Cresta is a good location for the new Builders Express but also found three more alternatives and assessed the risks and prospects for the company’s market share. The only thing to figure out now is which shopping centre is the best fit for a new BEX. Solving this problem, we focused on two factors: remoteness and attendance.

Analysing stores the Cresta residents went to, we calculated not the straight line distance from point A to B but the road distance. It turned out that 20 km is the longest route the buyer is willing to overcome for shopping. The best option for business is under 10 km from residential development: the share of buyers from Cresta alone for shops within this radius was 20-50%. Therefore, we looked into the malls ten kilometres around Cresta.

This restriction was also supported by the fact that the farther the store was, the rarer visitors returned there. Loyal audiences are significantly more profitable when it comes to the cost of customer acquisition vs. customer retention. Therefore, we weeded out all the malls where the residents of Cresta went less than once a week. So we had 12 candidates left, including Cresta Shopping Centre. 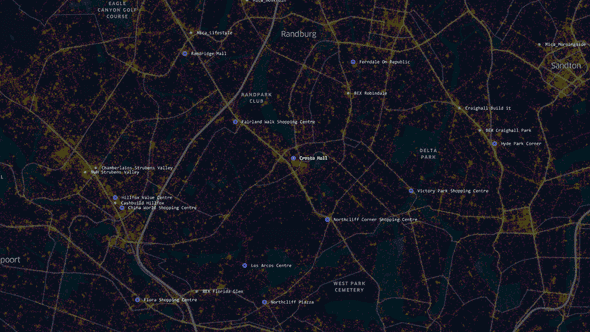 Malls are indicated by blue dots, DIY and hardware stores – by green dots

We assessed attendance by three parameters:

In July-August, the Cresta Shopping Centre had the most visitors, overtaking its nearest competitor thrice.

2. Popularity among the target audience

When counting only people who visited hardware stores, Cresta is leading again by 100%.

This time, we searched only for those shopping centre visitors who went exclusively to competitors’ stores in July-August. Cresta Shopping Centre is still in the first place.

Even though the difference between Cresta and the second most visited Hillfox Value Centre isn’t that big, there is already a Builders store and a rival Chamberlains near Hillfox. So why try to cram another BEX in there if Cresta is strategically more advantageous?

What We Found Out:

For the first time, locals have a store with household goods nearby – no more hours lost travelling to the next town. And residents of neighbouring areas come here because it is a modernly equipped BEX in a large shopping centre where you can find everything and then more under one roof.

Traditionally, to launch a new location, a company hires specialists at a high price who carry out labour-intensive sociological research on the ground within one to three months. They research the market, competitors, and infrastructure; they compose questionnaires, interview residents, and perform many other complex operations to extrapolate data and compensate for various errors. The result of such studies directly depends on the performers’ skills and the respondents’ openness.

Thanks to the developments that we already had, our analysis took a week. During this time, we identified the main competitors, counted the actual number of visitors to all nearby stores, found out the areas they live in, how often they go shopping, and how far they are ready to go shopping, and assessed the risks of cannibalization. All these insights came from, loosely speaking, data on movements from the house to the store, but it’s not the limit.

Geodata can tell a lot more for retail. Had the client wished so, with the same data, we could:

Builders did have such a request, so we adapted a version of our Points of Interest analysis system for them. It analyzes movements, segments users based on this data, and visualises the obtained insights. For more than a year, the retail chain has been using our audience analytics system on an ongoing basis. 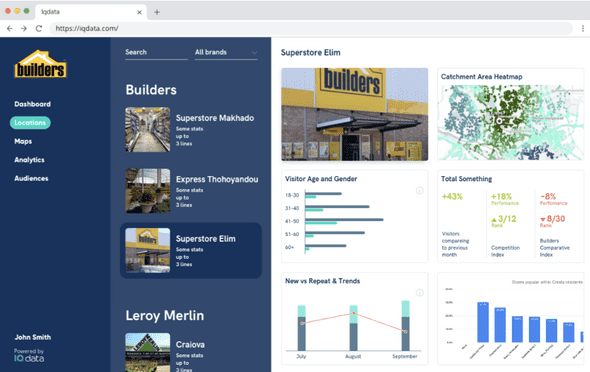 Interested in what else geodata can tell about your audience and competitors? Let us know, and we will happily share.